Official projections persistently overestimate Mexico’s electricity demand growth.  This has led to a chronic overbuild of new power generation capacity and sustained high reserve margins.  In the past, power plant and natural gas pipeline developers have not felt the impact as they displaced higher cost oil-fired generation.  Looking forward, however, this trend will skew spot market and auction prices alike. 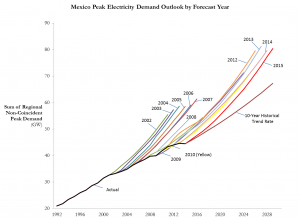 Sener’s annual Prospectiva del Sector Electrico consistently overestimate future electricity demand growth. Figure 1 above show the forecast sum of regional non-coincidental peak demand for each year the forecast was made since 2002 .  The most recent forecast in the 2015 Programa de Desarrollo del Sistema Electrico Nacional (PRODESEN) continues the trend with a base case forecast of 4.0 percent average annual growth and a low case of 3.0 percent average growth. By comparison, annual electricity demand growth over the past decade has averaged just 2.8 percent.
The persistent bias to overestimate demand growth stems from the Mexican government’s overly optimistic economic growth projections.  As in most countries, there is a political incentive to overestimate future growth to help balance future budgets and promote the government’s policy and legislative agenda.  This political imperative suggests that electricity demand forecasts based on government GDP projections will continue to be over-optimistic into the future.

Official electricity demand projections are used to estimate the need for new power generation capacity.  The time required to plan and build new power plants means that expectations for peak demand 3-5 years in the future drive current decisions for new construction.  Mexico’s official electricity demand projections average two GW above actual demand after three years, and are four GW too high after five years. As a result, Mexico’s electricity sector has been overbuilt year after year, leading to reserve margins ranging from 28 percent to 44 percent since 2003. This general trend at the national level is even more pronounced within the system’s various regions owing to regional variations in economic growth and increasing bottlenecks in the transmission grid.

This sustained period of overbuild has been masked as new higher efficiency and lower marginal cost natural gas-fired power plants have displaced older, more expensive fuel oil-fired steam units. As a result, utilization rates for IPP projects has averaged between 60 to 80 percent, even as Mexico’s overall average power plant utilization rate has fallen from 60 percent in 1999 to 52.5% in 2014.  With CFE providing a fixed capacity payment and relatively high utilization rates, private power generators and pipeline developers had little need to worry about the persistent overbuild.

Looking forward, however, this trend could skew spot market and auction prices alike.

As Mexico transitions to a competitive market model, CFE’s expectations for future demand will play a critical role.  As the sole provider of Basic Service to regulated consumers, CFE’s outlook will largely determine the volume of capacity and energy to be auctioned.  As a State Productive Enterprise, CFE now has a stronger motive to turn a profit, suggesting it is in the company’s best interest to improve its forecasting accuracy. However, this may be difficult to achieve in practice, as it may be politically difficult for CFE to endorse electricity demand projections that are significantly different than the government’s.

As the market is already oversupplied, many market participants expect the initial auctions to be limited and result in low prices.  CFE’s current wave of project will exacerbate the situation—the 2015 PRODESEN suggests that Mexico’s national reserve margin will increase from the current 28.6 percent to 41.7 percent by 2019, even under the government’s optimistic demand forecast .  There will be significant political pressure to ensure the initial auctions are a success, suggesting CFE may indeed stick with the official forecast in order to support a greater volume of capacity in the auctions.

Such a path may support higher auction prices and greater contracted volumes than would otherwise be justified, but would also reduce future spot market prices. As the expected demand fails to materialize, CFE will sell its excess contracted volumes on the market, potentially creating financial losses for the company and creating a challenging environment for power producers.  Such a situation would also test the operational independence of CFE’s subsidiaries as its distribution arm seeks to minimize its financial losses to the potential detriment of its generation groups.

This dynamic suggests that Qualified Consumers would do well to sit out the longer-term auctions and acquire any needed capacity via the future, likely oversupplied, spot market. Private power generators, on the other hand, would be wise to do the opposite and contract a greater share of their forward capacity via the auctions in order to lock in a known price rather than face the future spot market.

[2] An upcoming Spotlight will examine the assumed new electricity generation projects behind this projection, particularly self-generation projects, and provide an independent estimate of likely delays or cancellations.