Pemex and the Mexican government are under pressure from falling oil production and low oil prices.  Pemex’s estimated revenues in January, 2015 were  more than 50 percent below 2012’s peak , with payments to the government similarly reduced. January’s budget cuts to Pemex and CFE were therefore not surprising.  Even so, Pemex is now facing unprecedented financial strain—any further calls for it to shore up the government’s finances would severely undermine the energy reform’s intent for Pemex to operate like a private company.

Although mandated by the government, Pemex’s planned budget cuts could help accelerate the company’s transition to a more focused, business-oriented entity.  Most important will be the impact on the company’s personnel structure, asset position, and future projects.

In turn, substantial changes at Pemex could influence the implementation of Mexico’s energy reforms and private companies’ strategies. Specifically, private participants may benefit from greater availability of qualified personnel and service providers, reduced competition from Pemex-supported projects, and a wider range of investment opportunities through Pemex partnerships or, potentially, asset divestitures.

Producing less for a lower price

Pemex is being hit by both lower oil prices and falling production. Figure 1 compares Pemex’s total hydrocarbon production (including crude oil, other liquids, and natural gas) in million barrels of oil equivalent (mboe), the company’s average revenue per barrel of oil equivalent (boe) produced, and the company’s resulting total revenue.  From 2008 to 2014, falling hydrocarbon production was largely offset by rising prices, allowing Pemex revenue to rise from just under 1.1 trillion pesos in 2009 to average between 1.5 and 1.6 trillion pesos from 2012-2014.

As the global oil price collapse gained momentum in the fourth quarter of 2014, Pemex’s production decline also accelerated.  By January, 2015 total hydrocarbon production was 3.2 mboe per day, nearly 20 percent below 2008 levels of 4.0 mboe per day. The Mexican peso has also lost value relative to the U.S. dollar, softening the oil price decline in peso terms. Even so, at January’s average oil price and exchange rate, Pemex’s implied annual revenue would be just over 700 billion pesos – a more than 50 percent fall from the peak in 2012. 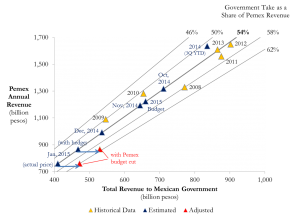 Source: Energy Narrative based on data from Pemex financial reports

Pemex hedged some 228 million barrels of its 2015 production at a price of US$76.50. At January’s oil price and exchange rate the hedge increases Pemex’s annual revenue by roughly 100 billion pesos.  This helps, but the company will remain under great financial pressure if oil prices do not rise. The situation will be even more difficult in 2016 as no similar hedge is in place beyond 2015.

Pemex’s royalties and other taxes provide roughly 40 percent of the Mexican government’s budget, leaving the government highly exposed to Pemex’s declining revenues. Figure 2 shows the overall government take as a share of Pemex’s total revenue since 2008. The figure has ranged between 50 and 58 percent during the period, averaging near 54 percent. In the fourth quarter of 2014 the average government take fell dramatically, as tax reductions owing to Pemex’s rapidly growing financial losses were only partially offset by a special 51.6 billion peso charge on the company. Applying a 54 percent government take to Pemex’s most recent estimated revenue suggests the Mexican government could face a budget gap of up to 250 billion pesos if oil prices remained at January levels for the entire year. Pemex’s price hedging program could reduce this gap by just over 50 billion pesos, but government revenues will remain far below levels anticipated in the 2015 budget unless oil prices increase.

Figure 2: Mexican government revenue as a share of Pemex revenue

Source: Energy Narrative based on data from Pemex financial reports

The government has three options to fill this budget gap: raise revenue from other sources, increase borrowing, or reduce spending. President Peña Nieto promised there would be no new taxes during his campaign, adding a heavy political cost to the first option.  Increasing borrowing is a viable option given current low interest rates and Mexico’s moderate 43 percent debt-to-GDP ratio. Although Mexico’s borrowing costs could increase once U.S. interest rates begin to rise, the government is reserving new debt issues for potentially more acute budget shortfalls in 2016 and beyond.  As a result, in late January the government cut 2.5 percent from the planned government budget, equal to 0.7 percent of Mexico’s GDP.

Of the proposed 124.3 billion pesos in cuts, Pemex is expected to shoulder half (62 billion pesos), while the CFE is asked to cut 10 billion pesos.  The remaining 52 billion pesos are split across other government ministries, with nearly two-thirds affecting current expenditures and just over one-third affecting planned investment, including the delay of two high-speed train lines that alone accounted for 11.7 billion pesos. The announced cuts cover roughly half of the potential budget shortfall should oil prices remain at January levels. Although February’s higher average oil price will help to close that gap, further budget cuts are likely to come. Indeed, Mexico’s expected economic growth for 2015 was downgraded by 0.5 percentage points on February 18, adding further pressure to the budget.

As show in Figure 2, Pemex’s budget cuts effectively raise the government take by eight percentage points. If the original budget is set at a 54 percent take, the revisions would push government take to over 60 percent at January’s oil price –higher than the share in 2008 and well above average levels of the past seven years.  This implies that there is limited scope for the government to further increase its take relative to Pemex’s budget should oil prices remain low. Further calls on Pemex’s revenues would cut deeply into the company’s ability to maintain—let alone grow—oil production, potentially setting in motion a death spiral of falling revenue from falling production that would be difficult to escape.

These budgetary pressures come at a delicate time. Pemex has started its transition to operating more like a private company, but is still responsible for the bulk of the government’s revenue.  The way in which Pemex implements the cuts will provide useful insights into the pace and depth of Pemex’s evolution in the near-term.

The proposed cuts account for nearly 11.5 percent of Pemex’s spending as envisioned in the original budget. Pemex has stated that it will allocate the budget cuts according to six broad principles:

Pemex’s cuts mirror other oil companies’ cost cutting, although the government dictating the cuts is a step backward in Pemex’s efforts to operate more like a private company.  More important are the decisions and trade-offs that the cuts will force, either spurring Pemex to a more rapid transition or entrenching politically-driven decision making.  The six principles above would indicate an orientation toward business driven decisions; the specific actions that are taken will demonstrate how closely the company is able to adhere to them. Further increasing Pemex’s tax burden, or intervening in the way the cuts are implemented, would suggest the government will continue to treat Pemex as a ‘special’ participant in Mexico’s new energy markets.

Pemex leadership has announced that the cuts will affect operational expenditures, including staffing levels, and capital spending, including delays to refinery upgrades and deepwater exploration.  Pemex certainly has room to cut staff with nearly 155,000 employees. Which staff are cut will be very important: can underperforming staff be let go, or will the emphasis be on early retirement and similar packages that may also affect productive staff members ready to move on to new opportunities? CFE recently announced changes in the collective bargaining agreement with its union (SUTERM) that will make it easier to reduce staff. A similar agreement is under negotiations with Pemex’s union, STPRM. Indeed, a recent press statement suggests that reductions in personal services negotiated with STPRM will total 10 billion pesos (16 percent of the total budget cut), largely through measures to improve “productivity, efficiency, and personnel management.” This is likely to include layoffs and senior Pemex and government officials have already noted that unionized workers (which make up 71 percent of Pemex’s workforce) would be included in any staff reductions.

Other reductions in operational and capital spending would be best focused on activities that are non-core, that provide low returns, or are longer-term and thus less affected by a delay.  Identifying and trimming these projects may take substantial effort, and may also run afoul of political and regional interests.  Other remedies, such as squeezing contractors or delaying major projects regardless of the revenue implications, may be simpler to implement. Indeed, Pemex has recently fallen behind on substantial payments to contractors even as the government has requested additional revenues from the company.

Energy Narrative has identified five specific actions to watch as Pemex implements the budget cuts and adjusts it strategy and operations to adapt to a low oil price environment. These actions and their implications for private sector participants, include:

Main impact: Contractors and service companies will be most affected as work with Pemex becomes scarce and potentially less lucrative. Pemex’s negotiation methods will provide a valuable preview to future contracting with the “new Pemex”.  Private energy companies may benefit if a reduction in work with Pemex spurs greater competition among qualified service providers to work with the sector’s new entrants.

Main impact: Delays in adding refinery coking capacity could result in an oversupply of residual fuel oil if CFE maintains its schedule to switch current fuel oil-fired power plants to burn natural gas.  Cancellations and delays to other projects will create opportunities for other companies to fill any potential market gap with their own projects.

Main impact: The people that lose their jobs will be the most affected, with potential knock-on effects for political support for the reform.  Pemex’s future competitiveness is also at stake as skilled and experienced workers will be difficult to replace in Mexico’s current labor market. By the same token, private upstream companies could benefit if desirable employees take early retirement packages as part of the reduction.

Main impact: Companies willing to partner with Pemex will have a growing number of opportunities, potentially under better terms. Financial institutions (both domestic and international) and companies willing to take a passive role in Pemex projects (similar to Petrobras’ partners in Brazil’s Libra pre-salt field) may be best positioned to benefit.

Main impact: Companies with investment capacity interested in relevant sectors would benefit the most. Such a move would also potentially create a more competitive environment in Mexico’s downstream, helping all participants by reducing the risk that Pemex could use its market power to influence operations across the energy value chain.